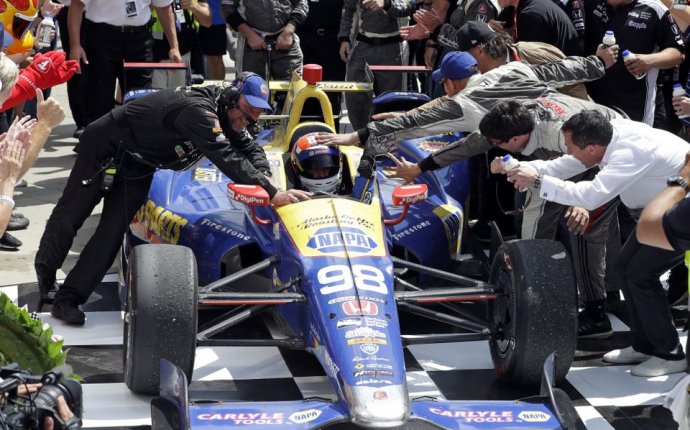 INDIANAPOLIS - Takuma Sato passed Helio Castroneves with five laps to go and held on to win the 2017 Indianapolis 500 on Sunday at the famed Indianapolis Motor Speedway.

Castroneves made two strong passes at Sato in the final laps but couldn't catch him.

"It was a fantastic race, " Sato said to ABC. "Hopefully the crowd enjoyed it."

It was Sato's first Indy 500 win. He wrecked on the final lap in 2012 while battling for the lead with Dario Franchitti. Sato, 40, is the first Japanese driver to win at Indy.

It was the third win in the last four Indy 500s for Team Andretti and owner Michael Andretti.

Castroneves finished second for the third time. He has also won the race three times.

Fernando Alonso, the Formula One champion making his first start at Indy, raced near the front most of the day before his Honda engine blew with 21 laps to go. He got a huge ovation from the crowd. It was the third Honda engine to give out during the race, a concern of many heading into the day.

The first 25: The first 25 laps were clean as pole-sitter Scott Dixon immediately went to the lead. But by lap six his teammate, Tony Kanaan, had already moved from seventh to first. The former Indy winner has historically been an aggressive passer at Indy and proved it over the first few laps.

F1 champion Fernando Alonso had a tough start, falling from fifth to ninth on the first lap. But he was was back up to fifth by lap 26. The top five at that point were Kanaan, defending winner Alexander Rossi, Ed Carpenter, Dixon and Alonso. Carpenter was the only Chevy in the bunch.

Lap 50: As the race settled in, all under a green flag, the Michael Andretti race team began to flex. Defending Indy winner Alexander Rossi and teammate Alonso - showing his chops moving up the field - were the top two flyers with the F-1 icon taking his first Indy 500 lead on Lap 37.

After the first quarter of the race there was no sign of the Honda power failing as four of the top five, led by Alonzo and Rossi, were at the front. The only Chevy in the mix was Carpenter in fourth, ahead of Kanaan.

Ohioan Graham Rahal has maintained his place in the top 15 while three-time Indy winner Helio Castroneves was slowly moving up to ninth.

Like Sebastian Bourdais earlier this month Dixon was flipped into the air (over the top of Castroneves), hit the inside wall coming down causing a burst of flame before rolling over again on the track and splitting apart upon landing. Both drivers walked away for medical attention.

"I'm fine, '' Howard said after being released from the medical center. "I'm really glad Scott's OK. He was a victim of this."

Dixon walked out of the medical center and told ABC he was a little shaken from the bumpy ride, but was fine.

Dixon's hit ripped the infield fencing causing a 19-minute red flag delay. As the drivers sat in line in the pits, the clouds became more and more ominous. Dixon emerged from the medical center "bummed" but not the worse for wear.

"Definitely a wild ride, '' Dixon said. "There was no way to try to avoid him."

The race returned to green flag racing on lap 60 with Alonso still in the lead with teammate Rossi behind him.

Lap 80: It's an Andretti race as the top three drivers - Hunter-Reay, Rossi and Alonso - were nose-to-tail. All this after the race suffered its second yellow and just as it came under the third.

No. 2 was for a Conor Daly crash and it lasted nine laps, followed by another on lap 81 for debris.

Interesting to note, as drivers hit the pits under caution, the Penske team was making a move as Will Power jumped into the lead and Castroneves drifted up to third.

It was a quick yellow as the track went green again in lap 84 with the previous Andretti front-runners now fourth (Hunter-Ray), fifth (Rossi) and sixth (Alonso).

Lap 100: The race became official with Castroneves holding the lead as the Andretti race team, along with Honda, continued its race dominance to that point. The lone Chevy challenger in the top five was Castroneves, who diced his way up to the lead even with all his troubles to that point on the track. But Hunter-Reay, Rossi and Alonso were right behind.

Lap 150: Max Chilton, a second-year driver for Gip Ganassi holds the lead with 50 to go. Rahal had rotated into the point, briefly, to become the 13th leader in the race on lap 113, one off the track record with still more than 80 laps to go. The first Honda engine blew on lap 136 and it was Hunter-Reay's as he was in the lead. With 50 laps and one green flag pit stop to go three Andretti drivers - Alonso, Rossi and Takuma Sato - plus Castroneves and Kanaan all had the look of a potential winner.

A day at the track:

Bourdais returns: Sebastian Bourdais, injured in a crash during qualifying, visited the track Sunday morning before the race and said he expected to return to race before the end of the season. Bourdais underwent surgery to repair injuries to his hip and pelvis.