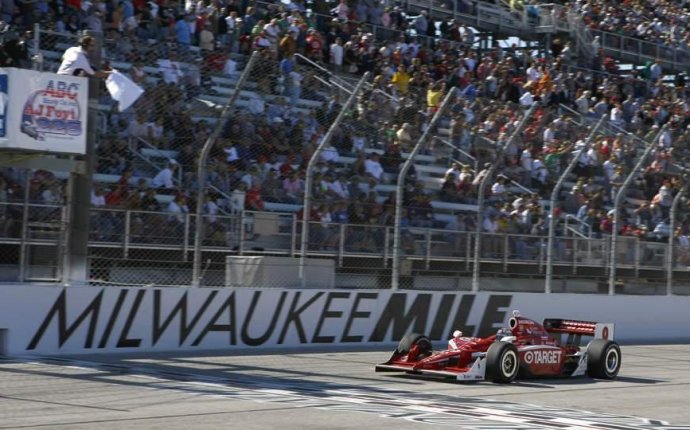 If you look closely at the nose wing of a modern Indy car, it is all carbon fiber tape, decals and colored vinyl. But the wind doesn’t care and the spectators in the stands can’t see the decals, only colors and speed.

Nearly 100 years ago, Harry Miller didn’t know much about wind, except to style his Indy 500, dirt and board track cars like small caliber bullets and polish them so the wind didn’t know they were there, until they weren’t.

Last weekend, the modern Indycars took to the Milwaukee Mile, the world’s oldest race track, opening in 1903, along with Miller, Offenhauser and other cars that raced in earlier years. Combined were the Harry A. Miller Club’s 21st Miller at Milwaukee event and the ABC Supply Wisconsin 250. I had to go! Every year since it started, I’ve been pining to travel tothe Miller event and I’m a huge modern Indycar fan too. This was the year to travel from Maryland to Milwaukee.

Why am I fascinated with the Millers, along with the Offenhauser powered cars that followed…not to mention the various offshoots that most all shared some DNA with the Millers? Perhaps they capture a swath ofAmerican history that follows my own. My dad was born in 1919, about the time Harry Miller began to hit his stride.

Along with his compatriots, Leo Goossen and Fred Offenhauser, Miller’s engineering influenced American racing – Indy, along with many sports and F1 cars too – from 1920 through 1980. My dad used to call the Indy cars, the “Big Indy Cars, ” and this wasn’t just what he called them. The Indycars were known as the “Big Cars, ” and that differentiated them from the dirt track cars. Interesting story. A.J. Foyt had no car to race at the Milwaukee Mile in 1965. His new rear engined car wasn’t ready. Jim Clark had just won the 500, first time for a rear engined car, and the roadsters were done for. A.J.had a dirt car on the trailer. He pulled it off and won the pole in it! Finished second in the race too.

A.J.’s cars were well represented at the event.

I asked a couple of the Foyt crew members who had wandered over to look at the old cars if there was anything similar between the new andold.

“They all have steering wheels and tires.” And that’s aboutit.

Old timers will tell you nothing sounds like an Offy. Last I heard one was 1981. I believe it was Car and Driver writer Pat Bedard in one of the last – unsuccessful – attempts to qualify an Offy. My memory of the Offy sound had faded, and I’ve never heard a naturally aspirated Offy before. Let me tell you, when they light off an Offy and the air sucks through those four big stacks and explodes through that exhaust pipe….Oh God, Oh God, Oh God. Wow, wow, wow. Then when the starter person pulls the remote starter from the front of the Roadster and the shaft keeps spinning, and ringing and vibrating. Well, that my friends is the definition of a mechanical symphony !

We complain about spec racing now. During the 1940s and 1950s, if you didn’t have a four-cylinder, double overhead cam Offy engine, you were nowhere. Well, except in 1946, when Art Sparks ran a straight six, designed with some help from Goossen. You might recall that the Offy in later years was known as the DGS or (Dale) Drake Goossen Sparks engine. Same guys.

That doesn’t mean there was no innovation in racing during those years. Lou Moore’s Blue Crown specials won Indy from 1947 to 1949, with Mauri Rose and Bill Holland. Powered by 270 cubic inch Offy’s, the cars were front wheel drive and featured Lockheed disc brakes. Inboard in front. Formula One and sports cars had nothing on Indy car technology in the 1940s and 1950s. No seat belts though. These cars were deadly! This car is listed as having been built in 1947 and may be Holland’s 1949 race winner.

Even when challenged by the NOVI V-8 (first raced in a Miller-Ford chassis) and the Ford/Foyt turbocharged V-8, the Offy prevailed. Interestingly, some parts from a 1930s Offenhauser engine will fit a turbo-Offy from the 1970s. You might be interested to know that the Millers and Offys have no cylinder head. Instead, the upper block, including the cylinders were pressed into a “barrel” crankcase.

Millers and Offys look nothing like a modern engine, but were able to withstand the pressures of super and turbocharging with the materials of the day. Internal parts were equally stout. A connecting rod from a turbo-Offy is shaped like a pipe and is about as thick as a small tree trunk. The most powerful straight 8, 91 cubic inch Miller’s in the late 1920s were said to produce 300 hp and the Offy turbos of the 70’s, up to 1, 200!

That round thing against the firewall is a supercharger! The car is a Miller 122 (cubic inch), last raced at Indianapolis in 1925 by Earl Cooper. Miller may have been big on polishing his cars, but they weren’t all show and no go. Fighting with his nemesis Duesenberg, camshafts got better (some say Miller pilfered the Duesenberg profiles!). Fuel got better. Intercoolers came along to help the superchargers. Engines became smaller – 91 cubic inches in the late 20s – but power climbed.

Interestingly, technology wasn’t the only thing pioneered on the early cars. Sponsorship was too. Forgive my blurry photography, but one of the fellows who restored the Miller 122 pointed out

this small logo, that of an early automotive lacquer. The car also featured a very tiny Locomobile logo above the grille. Locomobile, an early automaker, was one of the car’s sponsors. The Locomobile logo, along with the lacquer logo rode with the car when it raced. The restorer was very proud to have brought this car back to its very original configuration.