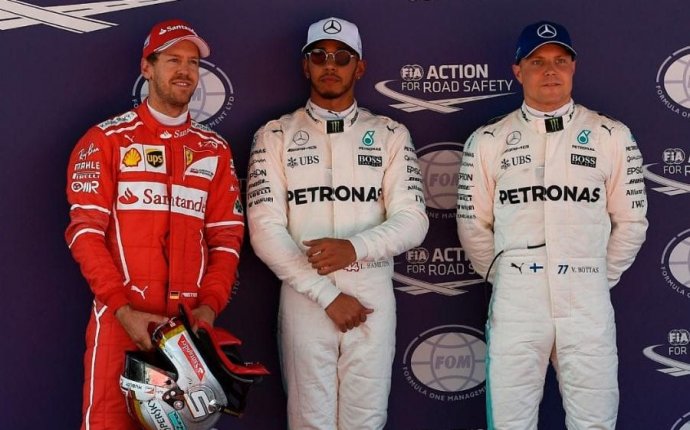 Mercedes' Lewis Hamilton laid down the gauntlet to title rival and team-mate Nico Rosberg on Saturday, as he secured pole position for the Abu Dhabi Grand Prix with an excellent qualifying performance.

The two rivals are set to battle it out for the world title in Sunday's Formula One season finale. It's a tussle Hamilton boosted his chances in after posting a time of one minute, 38.755 seconds to finish quickest; Rosberg will begin alongside the champion on the front row, while Red Bull's Daniel Ricciardo will be in third.

The qualifying session sets things up wonderfully for a key race. Rosberg will win the world title if he comes home in the top three on Sunday, while Hamilton must win and hope his rival finishes off the podium if he's to retain the crown; the latter trails the former by 12 points as things stand.

Here's a closer look at the standings in full from qualifying and a recap of how things panned out at the Yas Marina circuit.

Here is a look at how the grid will shape up for Sunday's race, per the F1 Twitter feed:

Although the battle for pole in earnest wouldn't begin until the third part of qualifying, Hamilton made a big early statement with his first timed lap of the session, as noted by the Mercedes Twitter feed:

Rosberg, by contrast, was a little more tentative in his approach to the first section of qualifying, trailing his rival by around one second. "I had two mistakes in there, " the German advised his engineer, per BBC Sport, as he was only the fifth fastest man on track.

There were no huge surprises in Q1, although a tough weekend continued for Toro Rosso after both of their drivers failed to make it past the first cut. Meanwhile, F1 broadcaster Mark Gallagher paid tribute to the efforts of Manor's Pascal Wehrlein, who put in a fine lap to make it into the next phase:

In Q2, Rosberg was a lot more assertive in his driving and was quicker than Hamilton through the first two sectors. He eventually came up a tenth shy of his team-mate, although there were signs of a potentially fascinating shootout for pole position in the final stages.

After that pair of searing laps, attention turned to the drivers trying to make into the top 10 scuffle. Jenson Button, in what will be his last-ever F1 appearance, failed to make it through in the McLaren, although Williams' Felipe Massa progressed in what's set to be his final grand prix.

The tension was palpable as the drivers geared up for the final part of qualifying given what was at stake.

On the opening runs, Hamilton was first to post a time and set a stunning benchmark with a 1:39.013; although Rosberg was again quicker in the first sector, he came up three-tenths short of his team-mate. Meanwhile, both Ferrari and Red Bull drivers were separated by just four-tenths between third and sixth.

It meant Rosberg had a significant gap to make up if he wanted to start the finale on pole. And while the German did get a little closer with his second lap, Hamilton improved again to take his fourth pole in succession.

ROS: "I came here to be on pole, so not ecstatic today. Lewis did a great job. As we know, there's still opportunities tomorrow" #AbuDhabiGP https://t.co/LJdDhYQbnA

In the scrap for third, Ricciardo produced a sensational effort with his last lap to oust Raikkonen; Verstappen will start in sixth behind Vettel after he ran wide at Turn 11 on his last effort.

Here are the times in full from Saturday's morning stint:

PROVISIONAL CLASSIFICATION: Two Ferraris in the top three after the final practice session of the 2016 season #AbuDhabiGP #F1Finale 🇦🇪 https://t.co/fxcxk0kQ7P

In the early exchanges, both Hamilton and Rosberg opted for the supersoft tyre compound, which is a little slower than the ultrasoft. Subsequently, the gap between the Mercedes men and the rest of the field wasn't so wide.

Indeed, the Red Bull pair of Ricciardo and Verstappen were mixing it at the summit of the standings as a result, with the former second behind Hamilton and ahead of Rosberg. The Pirelli Motorsport Twitter feed offered an insight into the game plans of the teams ahead of qualifying:

The tyre strategy for #FP3 is a simple one: use the tyres that you don’t think you’ll need for the rest of the weekend. #AbuDhabiGP

Meanwhile, there was a brief scare for Hamilton during FP3 as he complained of a loss of power in his Mercedes. However, he was advised by his engineer "it looks like it was just an unexpected D-rate, " per BBC Sport.

On the ultrasoft compound, Ferrari's pair of Vettel and Raikkonen were able to move to the top of the pile, with the latter just edging out his team-mate. Mercedes' Twitter feed offered a warning to the rest of the field, though:

Rosberg was out first on the fastest tyre and did go to the top of the timesheet. But Hamilton, as he has done throughout the course of the practice sessions, was able to find an edge; a poor middle section from the German opened the door for his team-mate.

Hamilton looked to have an edge on his team-mate once again.Clive Mason/Getty Images

Vettel wasn't done quite yet, though. The Ferrari man emerged on a fresh set of ultrasoft tyres for a qualification simulation lap and was the first man to dip below the 1:41 mark, moving to the top of standings in the process.

As noted by the Autosport Live Twitter feed, there was no great urgency from Mercedes to hunt down top spot:

Hamilton and Rosberg are back on track, but they have seven laps apiece on their tyres so Vettel's time is not under threat. #F1