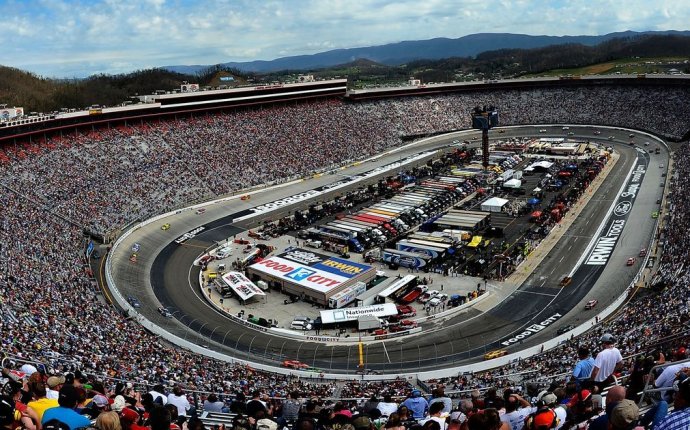 They have spent gobs of hours with various companies studying sight lines, checking “every seat in the house to make sure there’s no sight line issues, ” said Rust, the track’s senior director of purchasing and technology. In this vein, they had to use caution with the infield seating. (Infield seating!) “We had to make sure any temporary seat we build doesn’t impede on a sight line of our permanent seating, ” Rust said. “If it did, we needed to eliminate that temporary seating.”

They also planned to eliminate something else that still stood as of late August: three, towering Sunoco signs, in three of the corners.

Thoughtfully, they didn’t want somebody missing a play because of a Sunoco sign.

On the other hand, they overlooked those who might want to brag for years to come because they missed a play because of a Sunoco sign.

Probably the third-coolest thing about morphing from racing to football is the appreciation one might get for what it takes to conduct a football game. It’s even possible that millions of Americans might sit at football games every year without knowing or appreciating.

Once the race ended on Aug. 21 — a day late because of rain — then came the parade of the dump trucks. There came 450 dump-truck loads of rock plus some sand. “A convoy of dump trucks, 27 of them, going back and forth to the rock quarry about five miles away, ” Caldwell said.

By Aug. 26, cushion had gone atop the rock and sand, and AstroTurf atop the cushion. Said Caldwell, “This part here in the infield, is three-and-a-half feet higher than it was a week ago.” It was three-and-a-half feet higher with “ten thousand pounds of material, ” all of it “to raise the infield, because our infield slopes and you want a football field to crest in the middle so the water runs off the edges.”

The field had to be certified. Yes, there are people out there, among us, who run around certifying football fields.

Even 10, 000 pounds of material didn’t begin to cover all the tweaks and adjustments and issues.

They had to worry about that newfangled tradition, the teams’ walks. There’s a “Hokie Walk” and a “Vol Walk, ” with five or six buses of teams and masses of fans and plans for safety in getting the buses to “their final destination, ” Rust said, “which will be right outside of the Pit Gate, which is typically our drivers’ RV lot.”

He said: “NASCAR scoring is very complex, but they take care of it. Football scoring systems, that’s all on us. So we’ve had to learn, ‘What’s it gonna take to run the scoreboard?’ ‘How do official stats run?’ ‘How does instant replay run?’ ‘Who operates the instant-replay systems?’ The game clocks. We’ve never had game clocks. So, the infrastructure, cabling, fiber, controllers, remotes, have to go in place, so the officials can control that from the sidelines. And you don’t just have one remote, you have to have redundancy built into every single aspect of the game. So there has to be two sets of cable, two remotes in case something were to fail.”

Then this Bristol Motor Speedway official of 14 years had his biggest struggle: referee microphones.

Because NASCAR and other races do not feature referees standing amid the field of play, announcing refereeing decisions, he said: “We’ve never had to have referee mikes, that can be with belt packs, and those referee mikes have to tie back to various areas on our property. That’s been a big thing to get our hands around.”

Once the 150, 000 settle in and fail to appreciate all that it took to produce football, expecting the referee mikes to just work swimmingly as usual, they will create the second-coolest aspect of football at Bristol Motor Speedway.

Rather like an English Premier League soccer match, they will sit mostly segregated, between fan bases, except they’ll be roughly half-and-half. The speedway’s bowl shape should allow for consuming noise, a byproduct proven year after year with racing.

He said, “We’re used to those fans cheering for 43 different teams.”

And so: “And so the concentration of the noise will be, it’ll be mind-boggling to hear that. I can’t wait.”

And: “Just imagine, the entire backstretch of the stadium is cheering for the University of Tennessee.”

The front stretch, for Virginia Tech.


Ryan Blaney practiced in a Virginia Tech car last month in the final week of racing at Bristol before it was converted for Saturday’s football game. (Wade Payne/Associated Press)

Many of them might even notice the coolest thing, the trappings of the mingling of the two American sports.

The Virginia Tech locker room, for example, will exist for one night in the Goodyear tire facility, which bustles on race days with frantic people preparing tires. Inside the structure, metal lockers have gone in, to be repurposed and sent to East Tennessee State University later on. Hokie signage is going up, as is a game clock, a big TV. Behind the structure goes a 53-foot shower trailer and a 32-foot restroom trailer.

Tennessee fans are used to checkerboards (in their end zones), but here they will see another checkerboard altogether, the Victory Lane checkerboard atop their team’s locker room. There, the winning team in this “Battle At Bristol” will receive its trophy.

There will be stanchions, thin enough to see around, remnants from the racing catch fence that protects fans from any flying auto debris. The dismantling of the catch fences for this adaptation to football, among the “things people don’t think about, ” Rust said, sounds like all Hades. “It’s probably the hardest job on the property, but it’s overshadowed by the field and by the seating and by the locker room, ” Rust said. “It is an intense job. They’re pulling down wire that has been there for 10 years” — wire that’s purposely nasty.

So while toasting to the wire removers, football fans also might want to find one another, as happens always. To help Bristol debutants and debutantes, there will be signage marking the turns and what-all, “to help them relate to our nomenclature, ” Rust said, so that a fan might say, “I’m over in Turn 2.”

Better yet, they will keep the racing sections, named for the sport’s extolled figures. “Turn 2 is Kulwicki and Petty and Earnhardt, ” Rust said. “So those will all stay the same, but once you get down in the infield it’s the ‘battlefield’ seating, and the touchdown clubs. . . . You can watch football from the Earnhardt section, from the Waltrip section, which covers all the Tennessee end zone and Turns 3 and 4. Allisons. Pearson. Kulwicki. Rusty Wallace Tower. Petty. Jeff Gordon Terrace. Yarborough.”