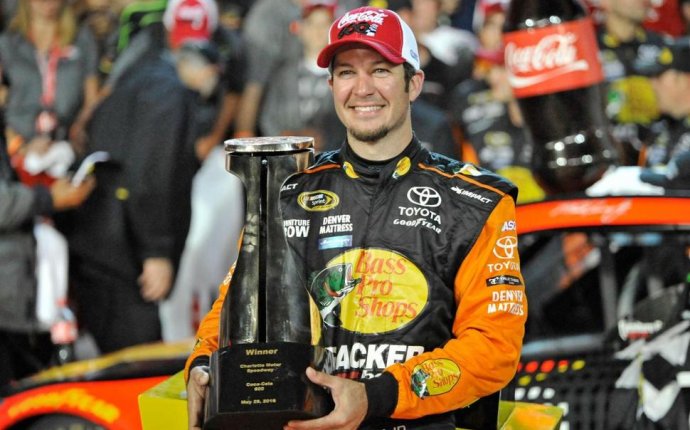 Who Won the Charlotte Race?

When the final 10-lap shootout began, with Busch sitting third behind Brad Keselowski on old tires and seven-time Cup Series champion Jimmie Johnson, Busch said it was now or never.

And once he got the lead in the NASCAR All-Star Race, he was never giving it up.

“We got a really good restart there and made a bold move on Brad, ” Busch said. “I knew to get out as soon as I could if I got that run on him.

“He left me just enough room there before that second kink to get my car through there. Once I heard clear in Turn 1, I was looking in my mirror to make sure the 48 didn’t have a run on the top side and (could) get up in front of him, and I kind of set sail from there.”

For the leader at Charlotte on Saturday night, no matter who it was, that wasn’t unusual.

The sport is fighting, with limited success, an aero-push condition that often makes the leader very difficult to pass. And that’s frustrating, unless you’re the leader.

Kyle Larson led the first 40 laps, dominating the first two 20-lap segments. Johnson led 18 of the 20 laps in the third segment after passing Ryan Blaney, who got the lead by taking only two tires.

And Busch led all but the first 200 yards or so of the final segment.

The sport is fighting, with limited success, an aero-push condition that often makes the leader very difficult to pass, particularly on intermediate racetracks such as 1.5-mile Charlotte Motor Speedway.

And that’s frustrating, unless you’re the leader.

It’s just racing. When you run into problems like that or bad luck ... you’ve got to be perfect to win a Cup race.

“It’s just so tough here at Charlotte, ” Busch said. “The groove is right around the bottom of the racetrack. There isn’t a middle, unfortunately, and I’m not sure why.

“There is room there for a middle and a top, but it just doesn’t work. There’s just not enough speed to prevail in some of those different grooves.

“It just seemed like that was the theme of the night, that once a guy got out front that was it.”

For much of the night, the guy who got out front was Larson. He dominated the first two segments, running away from the field in clean air.

Having the highest average finish in the first three segments allowed him to line up first to go to pit road. He knew how big that could be.

But a slip by a crewman dropped him back in the field for the final shootout.

“I knew being the leader off pit road was going to be a big thing, and I could tell the rear (tire) changer wasn’t around nearly as fast as the front, ” Larson said.

“I knew we were in trouble.”

All night, everyone was, except the leader.

Kyle Busch exits his car in a haze of smoke after winning Saturday’s NASCAR All-Star Race at Charlotte Motor Speedway in Concord.

“We had the car to be the winner, ” Larson said. “It’s just racing. When you run into problems like that or bad luck ... you’ve got to be perfect to win a Cup race. Tonight we just weren’t 100 percent perfect.”

Is there an answer, a solution that would allow a less-than-perfect team a way to make up a deficit on the track? Larson isn’t sure.

“You’re always going to have dirty air, ” he said. “Maybe there’s ways to make it better, I don’t know. I’m not an engineer.”

Saturday night, Busch didn’t care about dirty air or aero-push or anything else. He sat in front of the media, celebrating with owner Joe Gibbs and crew chief Adam Stevens.