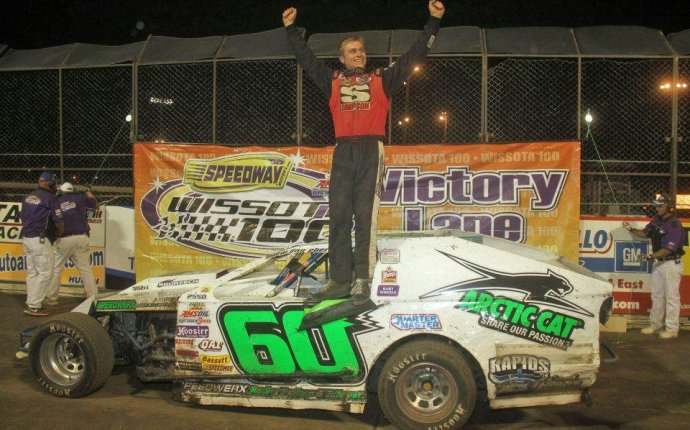 DASSEL, MN (September 17) – The WISSOTA Board of Directors announced on Saturday, to the massive crowd of racers and fans gathered at Dakota State Fair Speedway, that the WISSOTA 100 will return to the track in Huron, SD again in 2017.

“DSFS has done an outstanding job in hosting the WISSOTA 100 and the community has been almost unbelievably supportive, ” said WISSOTA executive director Terry Voeltz. “The streak of successful WISSOTA 100s in Huron has been a great thing for our drivers, who really benefit; the drivers get the biggest payoff of the year at the WISSOTA 100.

“Even the point funds have been increased over time as a result of the success of the WISSOTA 100 being in Huron, ” he added.

No event in and around the WISSOTA region – at any track – comes close in matching the WISSOTA 100 payoff, and that is because of the tremendous sponsor and fan support that’s been abundantly clear since the event started its residency at Dakota State Fair Speedway.

The speedway is located at the South Dakota State Fairgrounds, which has very ample room for racers to run side by side on the track and also to pit with plenty of room to work on their cars; in addition, the fairgrounds contain more than 1, 200 campsites.

“There were good reasons to bring the event to Huron in the first place, ” said Voeltz, “and those reasons continue along with many new reasons the event enjoys the success that it does. Tradition is a major part of a premier event such as the WISSOTA 100 and that has been one of our goals – establishing a tradition.”

Racers and fans often have questions about the site selection process for the WISSOTA 100.

“We have the following procedures that we follow when we look for the host track for our premier event, ” continued Voeltz. “We send out a letter asking every WISSOTA track to notify the WISSOTA office if they have an interest in hosting the race. After the deadline date for these replies, we then send out proposal forms for the interested and qualified tracks to complete and return to WISSOTA.

“Any and all proposals are then opened and reviewed by the board and employees with all the criteria being compared and analyzed. We look at the facility itself, capacity of the grandstands, pit capacity, camping and motel room availability, experience of the promoter and their staff, cooperation of the community, history of events at the speedway, even sponsorships offered by the speedway.

“Location is a factor as well, but we are mindful that no matter where the event is held, people have to travel to get to it.

“After reviewing the proposals, the board then votes on what they believe is the best proposal presented. It is a pretty simple and straightforward process, ” said Voeltz.

“Orv Chenoweth has great relationships in the Huron business community and brings so much support to the event, ” Voeltz said, “and that’s been really important. He brings unique sponsors, unique promotions, and unique enthusiasm to the WISSOTA 100.”

WISSOTA thanks Speedway Motors, AFCO, OneMain Financial and PolyDome for their tremendous support in making the event a success.

Dates for the 2017 event will be Wednesday, September 13 through Saturday, September 16 with a practice session again offered on Tuesday (September 12) before the first race night.