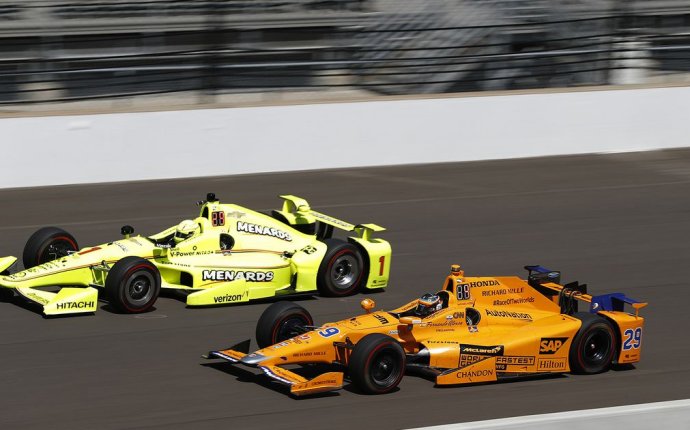 Takuma Sato of Japan held off a late-race duel with veteran Helio Castroneves to win the 101st running of the Indianapolis 500 on Sunday.

Sato, claiming his second IndyCar win, is the 71st driver to win the historic race and he did it in style, passing Castroneves to retake the lead with four laps to go. He could be heard screaming in celebration on the television broadcast after he took the checkered flag.

Castroneves, a three-time champion, finished second for the third time in the Indianapolis 500. He was followed by Ed Jones, Max Chilton and Tony Kanaan.

Here are updates from The Associated Press:

* 10:10 a.m.: Scott Dixon, who started the race in the pole position was knocked out of the Indianapolis 500 on Sunday by a terrifying crash that saw his car fly over the car of Jay Howard and land atop the inside safety fence, where it split in two amid sparks and flames.

Dixon's car was shredded by the retaining wall, but the tub of the car remained intact and the 2008 champion was able to climb out on his own to a roar from the crowd. He walked to a waiting ambulance while the race was placed under red flag and crews began to clean up debris scattered over hundreds of feet.

Howard also was checked at the infield car center and released.

The 1996 race winner lost his rear end coming into the corner and slid hard into the outside wall, wheels and debris spilling across the track. Will Power was following Lazier and his onboard camera showed Lazier slightly wiggling before the wreck.

Lazier climbed out of his car and appeared to be OK.

* 11:55 a.m.: The trouble Honda has been experiencing all month has bitten Ryan Hunter-Reay.

Honda has been plagued by blown engines ever since teams switched from the road setups for the Grand Prix of Indianapolis to testing on the big oval. James Hinchcliffe's engine blew on Carb Day and now Hunter-Reay's engine has let go with 64 laps remaining.

Honda engines have had far more power than Chevrolet this month, but reliability has been a major problem. Hunter-Reay's was the eighth Honda engine to blow in practice, qualifying and the race.

First, it was Ryan Hunter-Reay who was running near the front when his engine let go. Now, Charlie Kimball is out of the race after running in the top three with 33 laps remaining in the race.

That makes nine Honda engines that have expired during practice, qualifying and the race.

That also put James Davison in front, making him the record 15th race leader. Everyone went to the pits and Helio Castroneves was first off as he pursues his record-tying fourth career win.

* 12:30 p.m.: Two-time Formula One champion Fernando Alonso has blown his engine with 20 laps remaining in the Indianapolis 500, the third Honda to explode in the closing laps of the race.

The crowd went crazy for Alonso as he climbed out of his car.

Alonso, skipping the Monaco Grand Prix to run the race, had been fast all month and was near the front all afternoon. But as he tried to work toward the front late in the race, the Honda power that had been pushing for the lead finally let go.

Ryan Hunter-Reay and Charlie Kimball also had Honda engines expire, making nine of them during practice, qualifying and the race on Sunday.

* 12:40 p.m.: Oriol Servia, James Hinchcliffe, James Davison and Will Power are out of the Indianapolis 500 after they were involved in a wreck on a restart with 17 laps to go.